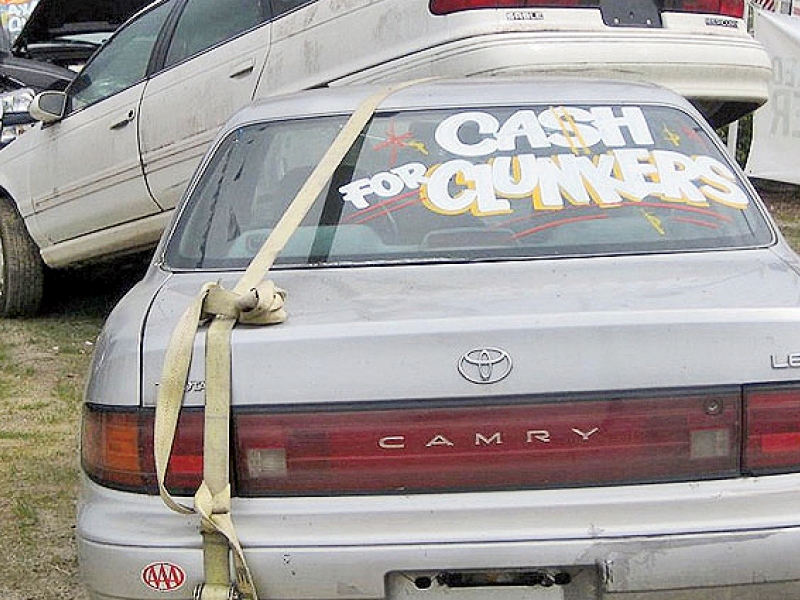 Cash for Clunkers is a bipartisan initiative that proposes to pay owners of gas guzzling, polluting cars up to $4,500 in vouchers that may be turned in to pay for new cars or even newer used cars with better gas mileage. Quoting the Associated Press, GOP USA reports that consumers may also use the vouchers to pay for public transportation.

The Cash for Clunkers program has all the buzzwords needed to make it palatable. Democratic California Senator Dianne Feinstein enthuses about helping the ailing car makers that just recently held out their hands to Congress for auto industry bailout loans. Republican Maine Senator Susan Collins speaks of limiting dependence on foreign oil, doing away with greenhouse gases, and of courses giving the limping economy a leg up.

The Cash for Clunkers program is not a new idea. As far back as July of 2008, the New York Times reported on what it termed an "eco-friendly stimulus." Citing California numbers, the publication goes on to say that "cars 13 years old and older accounted for 25 percent of the miles driven but 75 percent of all pollution from cars." Anyone who has ever driven on a road behind an older wreck waiting to happen, spewing bluish smoke all across the highway, knows what they're talking about.

Unfortunately, the notion that this Cash for Clunkers program provides the kind of income distribution the poor need to get rid of their old clunkers – after all, what CEO drives a gas guzzling, polluting clunker? – fails to take into consideration three very important aspects: insurance costs, licensing fees and loan rates. A financial analysis of a poor person's budget would easily provide some insight.

As a Californian I know first hand that the "poor" who are supposed to benefit from the Cash for Clunkers program do not take advantage of the state sponsored program in droves. The reason is simple: insuring a clunker is a lot cheaper than even a newer used car. Moreover, the best part of the clunker is invisible: there is no loan attached to it. Most clunkers are already paid off and thus do not take a chunk out of the budget. What is more, just the license fee for the first year would most likely eat up the vouchers.

How will the "poor" afford to suddenly factor in a car payment – most likely at a higher interest rate because of previous credit problems – and also a higher insurance payment? The Cash for Clunkers program will work, but not for the poor. It will benefit the middle class, those who have a bit of flexibility in their budgets to factor in a car payment and also a rise in their insurance premiums, and those who just want to rid themselves of an unwanted, old yet drivable car and appreciate getting some cash quick.