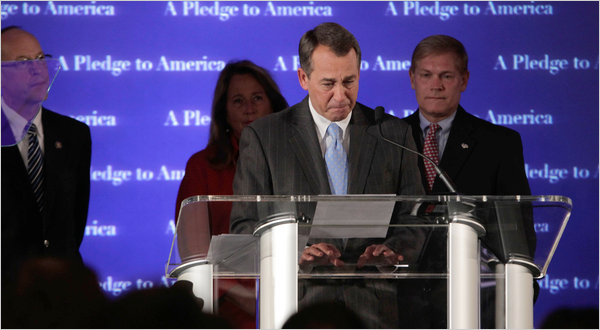 It's a classic scenario, Americans elect a new President in one election, and then kick a major chunk of his party's congressional delegation out two years later. Most see a President's first mid-term election as a chance to send him a message, to deflate his ego a bit (even if they don't personally think he's on an ego trip), as a referendum on his first two years in office. This is what President Obama faces next November when voters go to the polls. Will the people be in a mood to hand him a House and/or Senate controlled by the GOP? Will Mitch McConnell and John Boehner be the new leaders of the legislative branch?

Don't count on it.

While a major Democratic sweep like the ones of 2006 and 2008 is highly unlikely and Republicans will probably even make some gains in both houses, a take over of even one of the houses of congress is still unlikely. Why? Because Americans have long memories, ironically like the Republicans mascot, the elephant. People may well be dissatisfied with President Obama's performance so far and they may want to pack House Speaker Nancy Pelosi and Senate Majority Leader Harry Reid in a crate and send them to Timbuktu, but that doesn't mean they'll have forgotten on whose watch our economy performed a nose dive that would have earned it perfect tens if it had been competing at the Olympics.

Barack Obama may be the sitting President, but the specter of George W. Bush still looms over his party. People are not likely to suddenly put all of the blame for our country's troubles on Obama and the Democrats. And while the Dems. controlled the congress during last years economic collapse, it is not lost on many voters that the GOP controlled it when deregulation, which many blame for Wall Street's recklessness, ran rampant. Neither party is seen in all that good of a light by most Americans, but the GOP still trails the donkeies. It's become pretty much a lesser of two evils situation.

The basic truth is this, the Republican party is still in the dog house as far as most Americans are concerned. A recent poll found that just 20% of Americans consider themselves Republicans. While that certainly doesn't mean the other 80% will vote Democrat, it is still not a good sign for a party hoping to come out of the political wilderness. Then there is the lack of a leader and a clear message. In 1994 the GOP had Newt Gingrich and the "Contract with America" to propel them into power. Fast forward to the present day and you see that there is no one clear leader of the party, neither McConnell nor Boehner have stepped up in the way Gingrich did. RNC chairman Michael Steele, former Alaska Governor and 2008 VP nominee Sarah Palin, former Massachusetts Governor and 2008 Presidential contender Mitt Romney and House Minority Whip Eric Cantor have all been very vocal in their opposition to Obama's plans, but none of them have been able to capture the position of conservative standard bearer that Gingrich held 15 years ago.

The most likely scenario is that Republicans make marginal gains but that the Democrats stay in control. They need to pick up at least eleven Senate seats to regain control of that chamber, and the chances of that are astronomical. As for the House, at this moment they need 41 seats to regain the majority, though this number is subject to change pending the results of ongoing special elections and the possibility of more vacancies in 2010, at any rate, a 41 seat pickup is a tall order even when your party is popular, and practically a miracle if you're in as bad a position as the GOP is now. Most see the best case scenario for the Republicans as a 5 seat Senate pickup and a 20 seat House pickup, better than the last two cycles, but not enough to put them back in power.